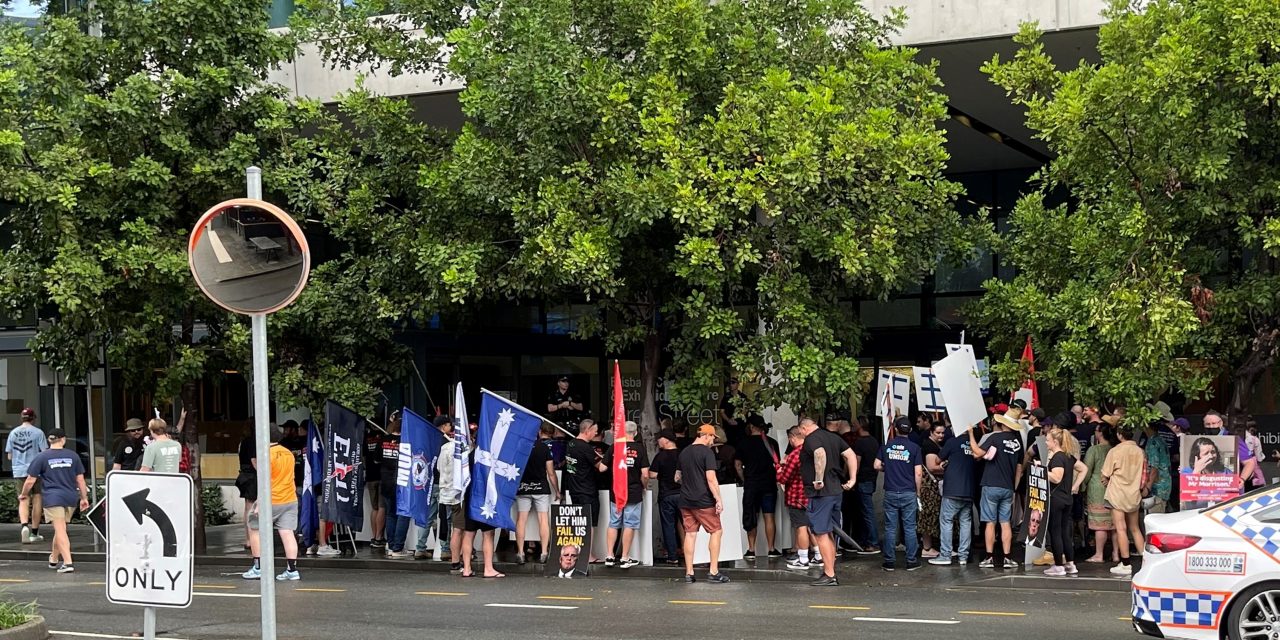 Australia’s political and press elite descended on the Brisbane Convention Centre on Sunday morning for the official launch of the Coalition’s election campaign, and community protestors were on the scene to make their voices heard.

The launch comes at an inflection point in the campaign, as Scott Morrison attempts to redefine perceptions of his character as a “bulldozer”.

“I had one focus as your prime minister – save the country,” the Liberal leader said

There were moments in the speeches which hinted at the fear the party holds of losing key seats long thought unassailable, largely to climate candidates, or “teal” independents. Greeting the crowd of Liberal supporters, Treasurer Josh Frydenberg perhaps unintentionally gave credence to criticism that he has lost support in his seat of Kooyong.

“I wish I got that reception in Kooyong,” Frydenberg said after taking the stage to a standing ovation.

The Prime Minister used the campaign launch to unveil the Coalition’s plan to address the housing crisis, a scheme allowing first home buyers the opportunity to dip into their super to help fund the purchase of a home. Under the plan, Australians would be able to use up to 40% of their super to get into the housing market, up to $50,000.

There has been board criticism of the plan, with the Labor Party housing spokesman Jason Clare labeling the policy “the last desperate act from a dying government.”

“This would be like adding kerosene to a fire. Their super will supercharge the property prices,” said Clare.

“You shouldn’t have to raid your super to buy a home.”

The Australian Institute of Superannuation Trustees (AIST) has also raised concerns about the plan, arguing that the policy will only drive up housing prices and saddle young Australians with debt.

“Accessing your super early won’t get you closer to your dream home or fix Australia’s housing crisis. Using super as a deposit will drive up property prices, leaving Australians with higher debt and depleted retirement savings,” CEO of AIST Eva Scheerlinck said.

“Individuals should not be expected to sacrifice their quality of life in retirement because housing is unaffordable. More needs to be done to address the supply of housing and superannuation should not be the ‘go to’ to fix systemic problems that are the responsibility of government to address.”

This criticism has not been missed by the Coalition, with Superannuation Minister Jane Hume conceding on ABC National Radio on Monday morning that the policy would lead to a “bump” in property prices. This sentiment was countered mere minutes later however, with Scott Morrison telling reporters in Ipswich that the government would pursue policies to increase supply to offset this increase.

After learning of the location for the campaign launch late on Saturday afternoon, the Queensland Council of Unions pulled together an assertive crowd to make their dissatisfaction with the Morrison government known.

General Secretary of the QCU Michael Clifford, with volume and energy well suited to his role, ran through a laundry list of Coalition slights against workers, including casualisation of the workforce and stagnant wages.

Cost of living has quickly become the lead concern of voters this election cycle, with the stress of high inflation and low wage growth. All five Griffith candidates have listed cost of living as a key issue for voters; a rare consensus.

Speaking to the Westender, Clifford highlighted the gap between inflation and wage growth, and argues that a change is needed to address the cost of living crisis developing in Australia.

“Unions are currently campaigning for a 5.5% wage increase in the Fair Work Commission for 2.7 million workers who are dependent on minimum rates of pay. With inflation running at 5.1% nationally, this increase is needed to ensure that workers can get ahead,” said Clifford.

“Real wages have been falling under the Morrison Government and wage growth has stagnated over the 10 years the LNP has been in power. This critical gap between wage growth and cost of living will only increase if the Morrison government is returned, and it’s our low paid but most valued workers – such as those in aged care and health care – who are at risk.

“We need a government that will stand up for working people. Morrison needs to go.”