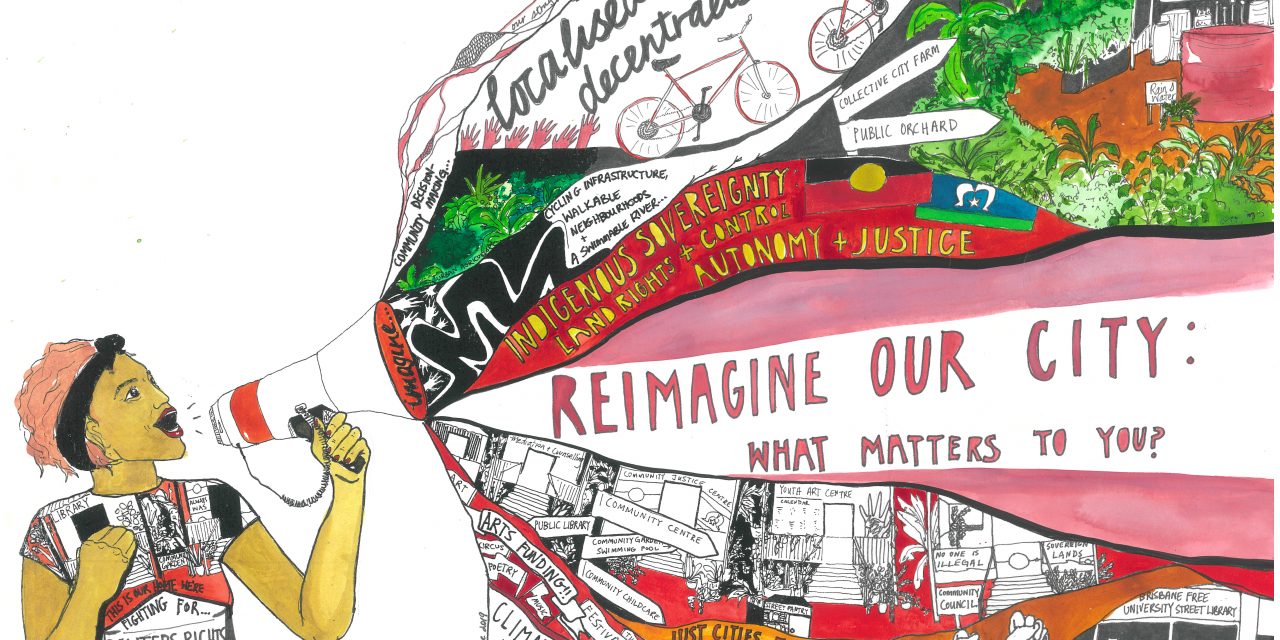 Gabba Ward Councillor, Jonathan Sri is inviting residents to join him at a workshop to ‘re-imagine’ our city. Can you imagine for example, he asks, a city that is:

“…cheap, convenient, sustainable and healthy for everyone… a city where all residents are guaranteed a home, regardless of their social status or income level.”

Cr Sri says that the event, which is planned for the 30th of November at Jagera Community Hall, will have a city-wide focus and will concentrate on the fundamental principles and values that shape decision-making in the city.

The event will host talks and forums from experts in a range of fields, Cr Sri told the Westender, from housing, to transport, to the arts, and climate change adaptation. There will also be facilitated open discussions and collective visioning exercises so that residents can articulate their own visions for the city.

“We’re holding this conference to share expert knowledge from perspectives that aren’t included in government or corporate sector discussions about the future of our city, so that residents can gain a deeper understanding both of the challenges and alternative solutions,” Cr Sri said.

Several First Nations speakers will feature, including keynote presentations from awarding winning author Melissa Lucashenko and Uncle Sam Watson, and there will be a strong focus on homelessness and gentrification, Cr Sri said.

“We are really interested in disbursing power using deliberative democracy processes, but for residents to be able to participate meaningfully in local decisions, they need to be well-informed and have access to a wide range of perspectives.” Cr Sri said.

Cr Sri says that it is important for a wide range of residents to be able to participate in these discussions.

“Of the 50,000 residents in my electorate, and the millions living across greater Brisbane, only a very small proportion have ever been involved meaningfully in community conversations about the future of their city, so while some residents might feel like they’ve been to a lot of forums like this in the past, most residents won’t have had that opportunity”.

“Talking and finding common ground is a form of action, and in a complex city with so many different stakeholders and competing interests, you necessarily have to have a heck of a lot of discussions before making big changes, otherwise important perspectives are overlooked and ignored, and the reasons behind certain decisions won’t be understood.”

Community groups, and politicians from all major parties, have been invited to participate.

Asked if by holding the event so close to the next Council election he risks some cynicism from people who may consider it to be a Greens campaign-building event, Cr Sri said,

“It’s inevitable that some people will interpret any event I organise as being about electioneering, but it’s possible – and I think valuable – for community groups to engage with these kinds of forums while still clearly maintaining their independence and not explicitly endorsing a particular party”.

Cr Sri also hopes that politicians from other parties will choose to attend.

“…if representatives are genuinely committed to collaborating across party lines, they need to be willing to attend public meetings and events even if they’re being organised by someone from a different party.” Cr Sri said.

As to the detail, Cr Sri says that he is particularly interested in discussions about how the city can decentralise population growth, and how it can offer housing and facilities for more residents without cramming more and more high-rise into the inner-city or clearing bushland for suburban sprawl.

To this end, the afternoon sessions will pose specific questions on various topic areas for groups to discuss and attempt to answer. Cr Sri says the questions will be published in advance of the conference.

However, Cr Sri says, the event isn’t about drafting a detailed and comprehensive plan for part or all of the city.

“It’s about sharing alternatives to the dominant narratives that are spread by the property industry and other well-connected interests. Before a community gets into nitty-gritty detailed consultation on specific projects or plans, you at least need a loose consensus about what kind of city we want Brissie to become.

I’m hoping this event will give residents new analytical frameworks so that when they’re looking at specific projects or plans or studies, they can meaningfully critique some of the fundamental assumptions.”

Cr Sri says that if there are certain questions where participants can achieve strong consensus, such as, “What should the default speed limit be in residential neighbourhoods?”, he will be able to adopt them as default policy positions, both when making decisions as a councillor about specific issues, and as part of an election platform.

“We have a range of mechanisms to influence other policy makers, but by far the most effective is when a candidate makes specific commitments leading up to an election and gets a swing in their favour, which signals to other political actors that a certain platform has strong popular support and so they should adopt it too.”

Details of the event, including a full list of speakers, can be found HERE