Incensed that Toondah Harbour on Brisbane’s Moreton Bay is under threat from development, Clare Purser asked her artist friends to join her to raise funds to support the Birdlife Australia’s campaign to protect the site.

Toondah Harbour is a significant wetland listed under the Ramsar Convention, an international agreement to protect habitats of endangered species – in this case critically endangered shore birds. Toondah is under threat from the local council and developers who would like to change the boundaries of the site to allow a marina and 3,500 apartments to be built.

The wetlands are an important feeding site for around 50,000 shore birds, including migratory birds that stop over from as far away as Siberia and fatten up on the nutrient rich mud flats. The site is also home to dugongs, dolphins, and turtles.

“We are very worried that this development will open the door to developers on land that should be for everyone,” Ms Purser said.

Ms Purser was joined in the project by Alex Shaw from Woolloongabba Art Gallery who offered gallery space for the exhibition. Mr Shaw said that when approached he was happy to make the gallery available, after all, he said, “its a great cause, a great idea… it was a no-brainer really.”

“It was about getting a whole bunch of good artists together, and supporting a fantastic cause,” Mr Shaw said.

As a result of their efforts, 66 artists donated works (some donated two) to raise awareness of the threats to the harbour. Each work is for sale for a flat price of $150.00.

The Saving Toondah exhibition was launched at Woolloongabba Art Gallery on Saturday the 23rd of November by Judith Hoyle, Convenor of BirdLife Southern Queensland.

Judith Hoyle said she was honoured to be asked to speak at the launch and thanked the artists for their contributions.

“The donation of these artworks is an expression of outrage – an indication of how distressing so many in the community find the prospect of this development.

Ms Hoyle says that the development proposed by the Walker Corporation will be the first in Australia to be approved for a Ramsar-listed site, and is seen by the developer as a model for future wetlands developments.

“It is a national shame that a wealthy country like Australia could go down this path and think that its okay,” Ms Hoyle told the Westender.

The exhibition includes some of Brisbane’s most prominent Artists as well as some young emerging artists. Paintings, sculpture, limited edition prints and drawings are featured.

Some of the more established artists are John Honeywill, Stephen Nothling, Ian Smith, Mostyn Bramley-Moore, Paul Bai and Peter Hudson. Also some exciting young artists including Erin Dunne (winner of The Bayton Award 2019) and Jonathan Kopinski (a keen birdwatcher and painter). Occasional arts writer for the Westender, Crisia Constantine, was also a contributor.

Most, but not all artworks have been sold – check them out on line HERE.

All of the money raised will go to the wetlands of Toondah Harbour and our Bay. 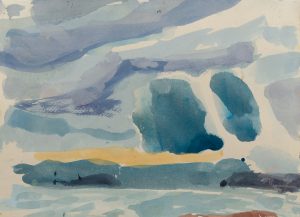 Ms Hoyle said that the Birdlife Australia campaign is geared around events such as the Council and State elections next year.

The State Government says that the next stage of the development approval for the proposed development sits with the Federal Minister for the Environment. Ms Hoyle says that technically this is the case, the Federal Government does have responsibility to assess the developer’s Environmental Impact Statement (EIS), but she says there is also a legislative mechanism available to the State Government by which it could work with the Redlands Council to revoke the Priority Development Area (PDA). It could do that now, she said.

Ms Hoyle said that the local community does not want this development, and the strategy now is to recruit more locals. In December, Birdlife Australia will run a community workshop to give people who want to be actively involved, the skills and resources to enable them to support the campaign.

See also, from ABC Radio National, The developer, the whistleblower and the minister.

See previous Westender stories on Toondah wetlands at links below: